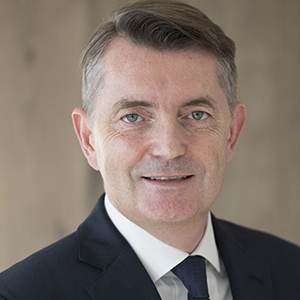 Philippe Heim has been Deputy Chief Executive Officer in charge of International Retail Banking activities, Financial Services and Insurance since May 2018. After starting in the civil service, Philippe Heim has led a two-phased career  within Societe Generale since 2007, first as Senior Banker and then serving in the Group’s strategy and finance departments.

Philippe Heim joined Societe Generale in 2007 as a Senior Banker, in charge of managing global relationships with a portfolio of French clients at Societe Generale Corporate and Investment Banking. In 2009, he was appointed Head of Group Strategy before becoming Deputy Chief Financial Officer of the Group and Head of Group Strategy in April 2012. Philippe Heim was appointed Group Chief Financial Officer in March 2013 and member of the Group’s Executive Committee.

Philippe Heim is graduate of the Paris School of Management (ESCP Europe), the Paris Institute of Political Studies (Sciences Po) and the Ecole Nationale d’Administration (ENA).

All sessions by Philippe HEIM